I Could Kiss the Postman 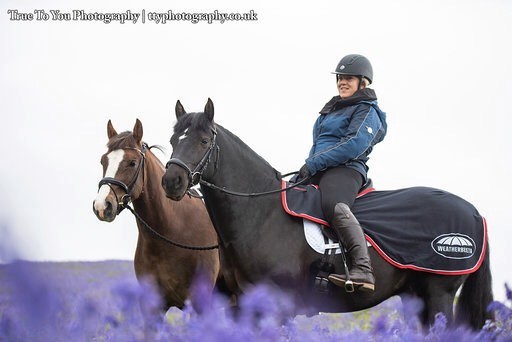 I could kiss the postman! The adorable shorty shorts sporting chap has just handed me a large grey bag titled ‘Christie, Coalman and Tally’.

Ungraciously tearing open the bag with a huge grin spread across my face, a little piggy squeal followed by ‘oooohhhh, soooo pretty’! The transparent carry bag being held up like Simba over the rock in The Lion King, the bold white WeatherBeeta logo making it that extra bit more special!

You see, Coalman and Tally’s mud wallowing had earned them a little gift, a sympathy gift, one to help dry a sob, after all no one likes seeing their sparkly new rug stained with nature’s sun block!

Without warning an oil covered hand comes sliding into my eye sight, one quick swipe and the ‘sharing’ pack of mini eggs included in the parcel has disappeared!

‘Sharing is caring’ my dear significant other mutters as he’s inhaling the eggs in overflowing handfuls.

Right let's do this….. Coalman tacked up and sporting his new WeatherBeeta exercise sheet, 3yo toddler Tally bridled up and ready to venture out along side his big brother. Tweedle dum and tweedle dee doing the two step as I shuffle Coalman round to the mountain block.

Mounting Coalman I instantly realise that riding and leading these two just isn’t going to happen today- Tally’s too busy trying to bite Coalman, licking the spot he desires to chew to even think about acknowledging me loudly saying ‘Walk on Tally’, Coalman now squealing like a mare in season, it dawns on me just how much the spring grass has taken hold.

Looking over to my other half who is now downing a pint of water to ease the sticky mouth he now has after inhaling the eggs, ‘fancy walking those off dear?’. He looks at his feet and grumbles ‘only if it’s not too far!’

Strutting round the local lanes feeling pretty darn cool with my new sheet on, trying to ignore Tally towing my other half into verges. His grunts as the typical toddler continues to space invade and bump shoulders with him, trying to hop his feet out the way when invisible shadows require all four of Tally’s feet off the floor. Dork! Young horses aren’t for the faint hearted, or those that don’t own steel toe cap boots!

Reaching the homeward stretch, one more corner, a canal bridge and a straight left to go, simples, we do it all the time, although both horses seem to forget that…..

Approaching the canal bridge there’s a family enjoying a picnic on the river bank, a guy fishing and a canal chap taking some snaps, none of which are a cause for concern, until-

PLANT…..Coalman has lost all use of his legs at the edge of the canal bridge, can’t move and won’t move! Well this is a little bit embarrassing as I look over and spot the canal chap snapping pics of us.

Taking charge, toddler Tally strolls past using the bridge as a catwalk, think dancing Shetland on the ‘three advert’, hooves and all. In that second Coalman finds his big boy pants and goes for the ‘toe dip’ action before leaping onto the bridge behind a dancing Tally.

Some things could not be timed better if you tried…..

As Coalman lifts himself into a Grand Prix piaffe a swan crosses the path of Tally up ahead, he instantly folds himself into the stretching dog position except his front legs are impossibly spread apart, glued to the bridge the swan takes one look at him before waddling on and climbs aboard his nest just to the side of the bridge exit…..

Continuing in piaffe I look back to the photographer who is still snapping pics of us, palm to face moment, will this end up on social media with ‘A close call’ and some water splash emoji’s captioned above. Passing a still planted Tally exiting the bridge, Coalman then clocks the swan who is now flapping his wings just as Tally decides it’s ok to remove the glue from his feet…… synchronised quarters in with my poor other half at the side forming a trio the whole way back down the final straight.

Upon arrival home and still laughing ‘Did you see that piaffe dear?’

The other half shakes his head, hands me Tally and replies ‘WeatherBeeta gives you wings!’