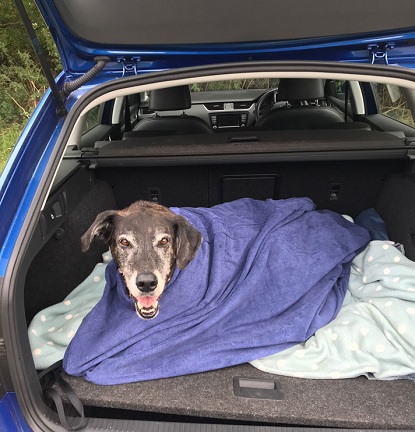 For the past decade I have had a shadow beside me even in the dead of night when there is no sun to cast one. My shadow isn’t the metaphorical “black dog” so often referred to when describing dark times – rather, my shadow is calm, sturdy, kind, and has brindle legs and a tail almost as long as his body. My shadow is called Mole. He is a Great Dane cross Doberman, whom I rehomed through the Blue Cross in 2008, and has been by my side ever since.

Mira Grant said that “there is nothing truer in this world than the love of a good dog”, and I wholeheartedly concur. This gangly hound who came to me with memories of his first six months of life filled with beatings, anger, and raised voices, blossomed into one of the most loyal, fun-loving and gentle dogs I have ever had the pleasure to know. He has accompanied me on countless rides with my horses, smiling up at me as we race across fields with the sounds of skylarks on the breeze, he has walked up mountains with me in the Lake District – his unbounded joy on discovering a cave or a soft patch of springy grass to roll on keeping me going even when my legs felt like they were wading through treacle. He has let me bury my face in the ruff of fur around his neck and cry when life has been dark and difficult, and he has yipped with delight and bounced around the garden with me on the best days. I have often said that if I could bottle even a fraction of the good in my dog, there would be no more heartache or sadness in the world.

Over the past few years Mole has been slowing down – approaching life at a stroll rather than a gallop. He is starting to feel stiff and struggling with arthritis in his back, one shoulder, and both front legs, and as such he is finding autumn and winter increasingly difficult. The dog who would once bound out of bed in the morning is now taking his time, gingerly testing each limb, stretching and feeling his way carefully until he is warm and the aches and stiffness of old age ease for a while. He can still run alongside a horse, and leap up a steep riverbank, but he struggles to get out of bed, and that leap or run will see him needing to rest for a day or so to recover.

Something I have struggled with for a long time is how long his thick, coarse coat takes to dry. I have never encountered a dog whose coat can hold water for so long! This has posed a real problem since Mole’s face began to look as though he had buried his nose in a snowdrift. Even if he is towel-dried to within an inch of his life, he will still be damp, and then that damp cold gets into his bones, and he shivers and struggles to tackle life with his usual vigour. I had tried everything (yes, even the hair-dryer… he was not amused) and had resigned myself to the fact that he could no longer swim or go out in the rain on cold days, until I came across the WeatherBeeta Dry Dog Bags. At first I didn’t get my hopes up, as I couldn’t think that any company would have made a bag the size of a duvet cover to fit dogs Mole’s size, but they have! They go up to a 3XL, which fits Mole perfectly. I ordered one and thought we would test it out by taking Mole on an adventure to the beach. He has never been to the beach or seen the sea, so I thought it would be the perfect opportunity to try out his new Dry Dog Bag.

We bundled into the car on a rather grey Saturday morning, and headed off to Sand Bay in Weston-Super-Mare, ready to splash in the sea and explore some rock pools. Sadly, we arrived six minutes after low tide, so Mole still hasn’t seen the sea, but we did have the most fabulous day. There was a chilly wind, salty and biting, and as a result the only people we encountered on the long stretch of shell-littered sand were two kite-boarders, a man in waders digging up razor clams for his supper, and a selection of other dog-walkers, all passing comment on the chill in the air.

We walked the length of the beach, paddling in the few pools left behind by the receding tide, and then re-traced our steps to head up onto Sand Point, a tall cliff with views out over the ocean to South Wales in the distance. Mole had a fabulous day – four miles of paddling in pools, establishing that salt water isn’t pleasant to drink, investigating piles of seaweed and driftwood, and playing with the other dogs we met on our walk. On reaching the summit of Sand Point, Mole decided that enough was enough, and flopped onto his back with his legs in the air for a rest, declaring the end of our adventure!

By the time we returned to the car, he was absolutely filthy – covered in sand, and decidedly soggy. We decided to head to our local pub on the way home to sit by the fire and warm up with some food, so thought we would pop Mole into the Dry Dog Bag for the journey there, in the hopes that he would be dry and a little less sandy by the time we arrived. I must say I was a little uncertain as to whether or not this would work, and also as to how we were going to wrestle a very tired, very dirty Mole into a bag. I couldn’t have been more impressed. We laid the bag out in the boot of the car, and then zipped it up around him once he jumped in. He had plenty of space to stand in it, and to lie down and stretch his legs out which was something I was concerned about – I would be reluctant to use something that didn’t enable him to stretch out as he is so prone to stiffness. He slept for the entirety of our hour-long drive to the pub and didn’t seem in the least bit phased by being in a bag.

On arrival at the pub my partner and I were both concerned that we would be faced with a still very damp and sandy dog when we unzipped the bag but were astonished when we unzipped it to find a dry, warm, sand-free dog! The bag itself felt damp, and when I shook it out there was a LOT of sand in the bottom, but Mole himself was dry as a bone, sand free, and not at all stiff or sore. I was particularly pleased to see that the dampness of the bag hadn’t soaked into his bed in the boot of the car, so once I had shaken the Dry Dog Bag out and popped it back into the plastic zip up bag it arrived in, the boot of the car was as dry and sand free as my dog.

I was so impressed that I have now ordered two more (one in every colour – he’s a very distinguished and fashion-conscious old hound!) and am looking forward to another winter of adventures with my shadow at my side, no longer worrying about him getting damp and cold and not being able to keep up.

WeatherBeeta often use the phrase “Weather Beaten” on their social media, and I have to say in the case of the Dry Dog Bag, this could not be a more appropriate expression. This product has helped me to beat the winter weather with an old dog, and he can now enjoy splashing in lakes and going on adventures in the rain without having to worry about the damp causing him problems. Thank you WeatherBeeta for giving my faithful old friend a new lease of life and helping to alleviate some of the symptoms of old age. My Dry Dog Bag will be in my car for many years to come.